A consistent need for it. Never truly resolved. A rebellion, the self railing against the very idea, the notion that I require the opinion of any other being to vindicate those things I express.

Where I fall short, in understanding, is when it comes to considering that all of those people are different. Not only individuals with opinions and notions of what works, but that they are all not me.

How could I possibly trust that someone has a better sense of style than I do when I know which colors I like and which fabrics feel cozy. Who better than I to know the thoughts in my head, how to express them in such a way that my ideals, my experiences are represented accurately. Who can have more of a sense of self than one’s self?

Advice is welcome (especially with regards to the style end of things, especially if you’re as someone as luscious as Mary, that girl has got it going on!) always,  and opinions are rarely ignored. My hesitation comes with the idea that the opinion is required. The action is only in response to the reaction is might get.

Ok, I know what you’re thinking (maybe). The action is consistently in response to a reaction that will come. A man buys a ring for a girl he expects will say yes in reaction. But I’m not speaking of actions that are reliant on others input to be fully formed, fully realized. I’m speaking of how we look, think and regard ourselves, not with ourselves in mind, but with the reactions of others. With a certain amount of exemption, most people don’t want to look stupid, they don’t want to stand out. The embarrassment someone suffers when a singer on stage singles them out, sings to them. It could be a moment of wow! Out of all these people, s/he noticed me! Typically the reaction tends more towards Oh my god, everyone here is looking at me, how embarrassing, I could die right now. After it’s over, the first question tends to be How did I look? A need for validation. You looked great! I can’t believe he sang to you. Then perhaps comes the exultation that they were special enough to be singled out. But why not the desire to be singled out all the time? Why not pride yourself on how good it feels to be you,  rather than how good it feels to fit it?

I’m all for belonging, I like the idea of common unity (I also like the idea of common sense!) of having enough of a sense of those around you to want to benefit them, and vice versa. Not I am my brother’s keeper shite, I am my own damn keeper, but having a sense of the world outside the personal space to respect those around you. I’m talking to you…dudes who don’t notice there’s someone in the lane next to you who just needs you to move forward an inch so they can make that right hand turn before the light changes and they’re caught..pedestrians who don’t think to be aware of the fact that if you let that car through before crossing they’ll be able to make it through the light a the next intersection and feel like a rock star…but I’ll save reality bubblers for another time…

We don’t live in a world where people are celebrated for being individuals. We wouldn’t need trend watchers, gossip columnists, disrespectfully psychotic photographers if people were less concerned with external satisfaction.

I write a lot. Most of it ends up stored in a file, or in a book at the bottom of a drawer. Some of it is really good. Incredibly so. Not to the extent that it should be published, I don’t necessarily think it’s wildly insightful for anyone but me. I don’t feel the need to show it to anyone, though if anyone wanted to read it, I have no problem with that. But I don’t need anyone to tell me it’s good, to know that it is. Compliments are nice, don’t get me wrong. I have an ego just as much as anyone who ‘thinks, feels, wills and distinguishes themselves from the selves of others and from objects of their thoughts.’ (loves me some online dictionaries!) But I don’t require external opinion with regards to my rantings.

Is it because I don’t want them that I don’t seek them out? Because deep down I’m terrified that the response will be unfavorable? Is that the same reason why I never bother to tag key words for this blahg and attempt to have it circulate a wider audience? Perhaps. Maybe I’m so far in denial about needing the proverbial thumbs up that I’ve created this belief that I don’t rely on anyone’s opinion to value myself. But maybe not.

Of course there are opinions I care about. If someone whose opinion I truly valued told me that I was a colossal fuck up, I’d likely listen because I know that there’s no bullshit there. This isn’t lip service. And so often, that’s all opinions are. The sales clerk who works on commission who tells you that gold lame empirewaist dress looks amazing on you. Dude, it was bullshit and we both knew it. But there was a part of me that wanted to believe her. (A small part that was dragged out back and shitkicked by the section of my brain responsible for logic and reason.) That part who feels insecure about her lack of fashion “sense” and desperately wants to feel validated in her choices. In the end, I knew myself well enough to say, no. This is definitely not for me. She instantly agreed. I thought, where was that conviction when I was hemming and hawing about it in the first place? I think it likely that she felt just as unsure as I did, and so went with the affirmative. If I liked it and she told me noooooooo (which she should have) I might be offended and leave. Wheras when I came to my senses and decided against it, she instantly concurred.  Though using someone in the service industry is probably not the best example of a time when an honest opinion is required. I have such a hard time going shopping because of my reluctance to put my sense of style to the test. But relying on others to validate how I feel when I try on clothes does not help me to get better at it. It just makes me dependent. The countless times I’ve bought something I wasn’t totally sure of because I was assured it was perfect, now, hip, flattering, stylish and then never wore. Seriously, never wore. Because I didn’t really like it. But I didn’t trust that aspect of myself to know better. I rationed that she works in a clothing store because she knows clothing. She knows style, fashion, whatever.

But she doesn’t know me.

I do. So why would I hand over myself to some for justification that I’m worthy of whatever? It’s so easy to say, well, I wouldn’t. But we do. All the time. Not with everything, certainly. But enough. Less as we get older I think, but every so often.

There are some traits that one can chalk up to being human traits. Certain species wide foibles. I don’t think this is one of them, I think it’s been learned over the centuries and now it’s far more pertinent because of the widespread mania of advertising. How often do we notice commercials, ads on the street, jingles in our heads, signs and flashing lights? How many people throw up upons seeing times square for the first time? (That’s one of my dreams) It’s insidious and we’re apathetic towards it. The idea that a soft drink company can trademark a particular shade of blue? We’re constantly dictated to about how we should dress and feel and it’s so far outside of ourselves that it’s no wonder we seek out external encouragement. I know it’s not just that. There’s more to it, I’m sure. But tonights not the night for me to expound on this any more. It’s time for me to settle in with a good movie, a cup of tea and some furious knitting activity.

Yes, I am a furious knitter. I really want to learn to make legwarmers (they are a passion, I have a drawer dedicated to legwarmers and long socks alone!) but when I started making a pair, I went too far and so decided I must be making a scarf and since I was using a gihusen ball of wool, the scarf is quite long now, with no feasible end in sight. I should be done by the time the snow melts, which means I will have a 12 foot long scarf for winter next year! Though I’m pretty sure that I won’t be living anywhere quite as cold as it is here. And with that statement I’ve likely ensured that next winter I’ll be chilling in Reyjavik. Literally. I hear the fjords are beautiful this time of year. Actually, every time of year. For those new to reading my rambly ranty remarkings, Iceland is most certainly on my list of places to see, so any hesitation I might express at the thought of being there is most definitely in jest. Of course, being a total cold sissy, I’d much rather visit in the summer.

And so darlings, I wish you warmth, the kind afforded by 12 foot long scarves around your luscious little hearts and minds. And remember, I believe that you are worthy, not that you need me or anyone else to validate how completely awesome you are. 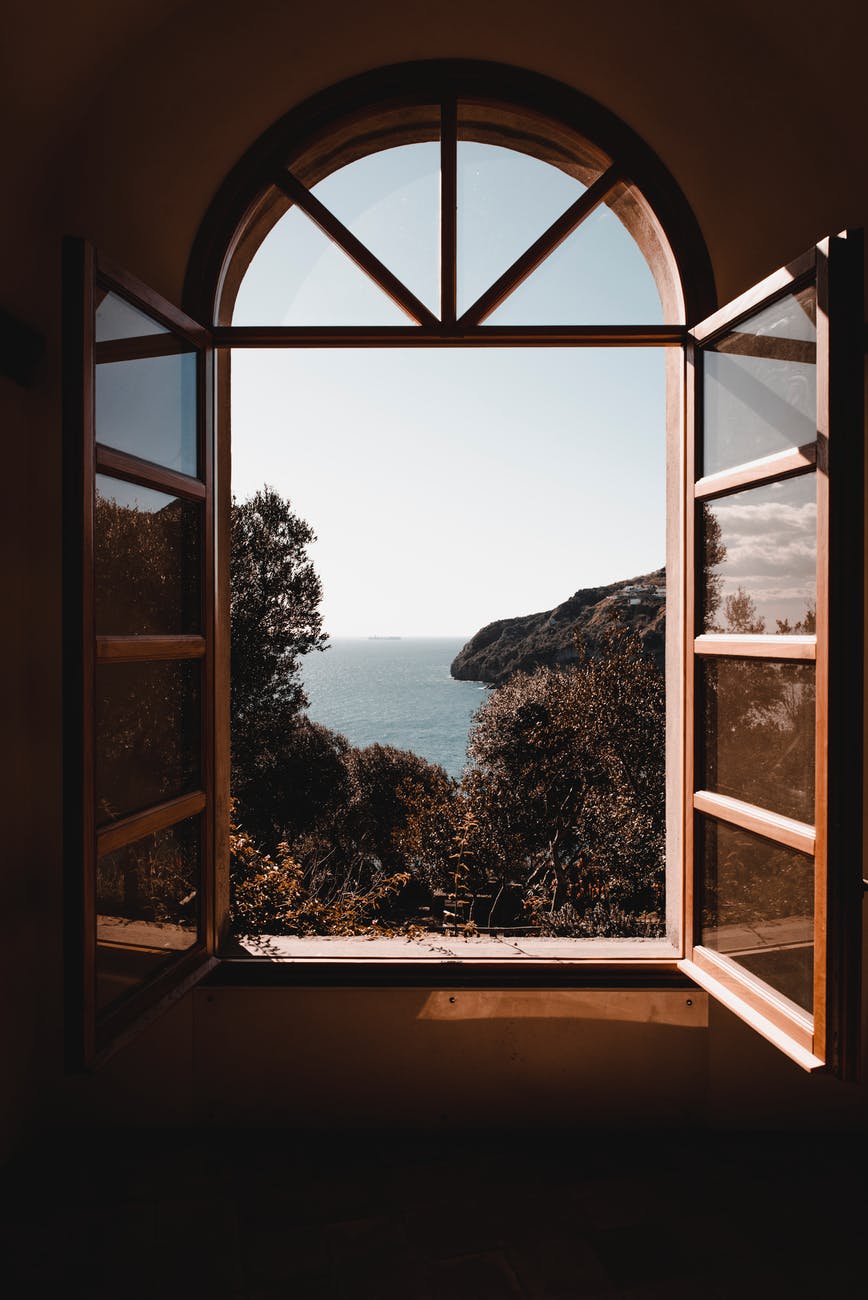