So, this is me. But only somewhat.

An experiment in autobiography, rehashed and relayed. I don’t often post things that were written at an earlier date, I just don’t feel the same way as when I wrote it. And this isn’t necessarily something that needs saying, but I’ve been having a hard time with the words lately.

I was born a diamond, rough and ripped from a womb serrated by cancer, a miracle, a fighter, youngest fire in the zodiac, star gazer springtime april showered with affection. There are no pictures, but it did happen.

Precocious and thoughtful, buried in books, dreaming of being an ordinary girl who found her way into extraordinary adventures, knowing it wasn’t possible because ordinary girls don’t have eyes that shine like mine.

Surrounded by nature, it rarely occurred to me to wear shoes, to barricade myself from the way it felt to feel. I can call forth at any moment the sound, the scrape, the sensation of bark under barefeet, limbs tangled as I climbed, me and tree pushing up into blue sky. I remember well the slow curling papery peel of arbutus layers, dark red trunk and shiny green leaves hiding the pale flesh of a tree that taught me what merit there is in flexibility. I found freedom between carpet covered wood suspended by thick rope of a swing fashioned by my father’s knowledge of how much I loved to fly and our neighbours’ knowledge of how to build stuff well.

I’m still barefoot whenever I can be. I’m still a young fire, with flash in the pan rage that tempers quickly and dissipates, leaving me with a sense that anyone who holds on to anger is doing it wrong.

I’m learning to be compassionate, but I struggle with empathy. I struggle with the need to know how it feels to be you. The reason for this is because from a lofty position of arrogant wordsmith, I’m pretty sure I can imagine a you that doesn’t require you to be there, maybe even rewrite your faults as flattering foibles.
From the humbler position of self-aware human, I’m convinced there is nothing I can do or say that will come close to fairly representing who you are, and so why don’t I save everyone the trouble and not try?
Ergo, forgo the fallacy of empathy, and just learn to be compassionate enough to respect your choices as your own, your life as your own, your faults as the cracks in an unsteady firmament that will one day shake loose those habits ingrained and long since useless, ideally leaving you stronger, able and free.
I should show myself the same compassion. Some days I do.

I am the music that winds down but not out. The quiet hum that might be an fridge or an bug or a song that is so familiar if your ears could just get a better grip on it, maybe you’d figure out what the next line is…

I am straight shot eyebrow horizon line with a slight curve to the right.
I am slow sipped whiskey fire dark melody lullaby caught like a bottom lip in a smoke stained smile.
I find calm in the slow sweat down the back of the neck tickle breezeless sky sunshine and in the softest breath of wind that encourages the dance of skirt swish on bare flesh.

The sound of water is what makes me move most, what calls me home. Inland lakes and rivers speak a language I well understand, we’re all just trying to go back.
The whales were smart, they turned around eons ago, taking their cue from the stars.

It is difficult to shine the light inward and be honest, living with this mirror refracted, self perspective abstracted point of view. How I see me is not how I am seen, is it accurate to suggest that both are me?
When I look in the mirror I’m surprised. I think I’m more beautiful when I don’t see myself. But I think that I see myself clearly.

Clearly, I am a conundrum, a walking contradiction, dictating a narrative that suits my purpose and constantly striving for a self aware story that turns out to be true. That’s the happiest ending I can imagine. 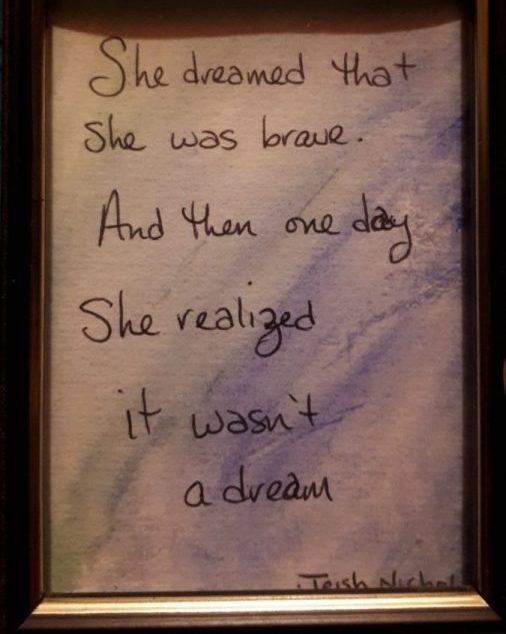 Once upon a time

I’m scared to bring my bed inside

And you are someone whom I love very, very much. xo

Thank you for sharing yourself with such wonderful wordsmithery. I feel the last 2 paragraphs about myself, so much.💞