Previous Next
Birds and Bee

The birds have been active in my life lately. Not in a Hitchcock ‘my eyes!’ sort of way, more of a ‘ahem..was there something you were supposed to be doing right now?’ as gentle as a caw in your face manner might be possible.

I don’t really make note of birds other than magpies, because they really never let your forget they’re there. Like, never. But in the last few days, the crows have been circling, so to speak. And it’s not just birds, it’s all sorts of things which are apparent and available if one takes notice. I don’t think that signs are suddenly appearing to me, I think it’s more that I’m settling into a sense that I am more determined to figure out what works for me and doing that.

The birds and the bees is/was a euphemism for sex. It was the inevitable (in some families) discussion which would happen when parental figures deemed it necessary. It was often accompanied by a sense of awkwardness, especially when depicted in films. Such a strange tone to take with a conversation which explains how we fit within the natural world. The thing which separates us from the beasts, as it were (we are all animals, never forget that) is our ability to be embarassed, ashamed and humiliated by the most natural parts of ourselves. Thanks organized religious, ya dicks. (I will also happily load some blame onto the patriarchy because I would like to smash it.)

As an aside, as I type this, outside is what is most definitely a murder of crows circling the building across from me. They seem to have a lovely hang out spot on the roof, but the majority are playing with updrafts in this lovely dawn dance.

I’ve never been one for routine. I eschewed it. I ate different food every day. I worked different jobs, lived in different places. I considered myself a bit like Mary Poppins with the whole “I’ll stay until the wind changes’ attitude. And then I met someone who I like, in a very birds and bees sort of way. He’s pretty cool. And has no desire whatsoever to go anywhere. That’s not completely true or accurate, there are places and things he would love to visit and see. He just has no desire to travel and be among humans. I get it. I’m not a huge fan most days either. We both acknowledge that humans are capable of great things and grand art and beautiful music but there is a tendency to strive for mediocrity a lot of the time.
(If anyone reading this is suddenly thinking, ‘oh my goodness, I think she’s a snob’ cool beans, you’re right. I see what humans are capable of, and I think there are lots of people who refuse to see beyond their own prejudices and fuck those people. Not in a sexy birds/bees way though because it would be better for the collective humanity if they didn’t breed.)

At any rate, this person was something new for me. An alternative to what I’d been doing before. I never really thought of myself as monogamous, I never really thought of myself as someone who wanted to stay in one place for any longer than a couple of years. And so I created this life that was consistent with upheaval. I know I wrote a while back about how the ocean is constant movement and that’s good enough for me, but there is a real wealth in recognizing cycles. Which is something I haven’t been very good at. I’m getting better, it’s easier to see when one has gathered enough data. If I sat and watched the birds this morning and this morning only, I might not notice any sort of pattern to their flight, their gathering, their habits. But if I make a habit of my own, of getting up at a certain time, and being at my desk by the window with the view of the building across the street for a stretch of days, or months, or even years, imagine what I’d learn not only about the world around me, but about myself.

What a lovely gift he’s given me, not only to see me in all my chaos and be totally unperturbed by the maelstrom but to willingly engage with it, but also how to find those calm places inside myself so that being still feels more like freedom than capitulation.

If you’re not afraid to face the storm, there’s no need to run from it.
(Obviously I don’t mean real storms where you could get beaned by a tree or something..it’s a metaphor, silly.) 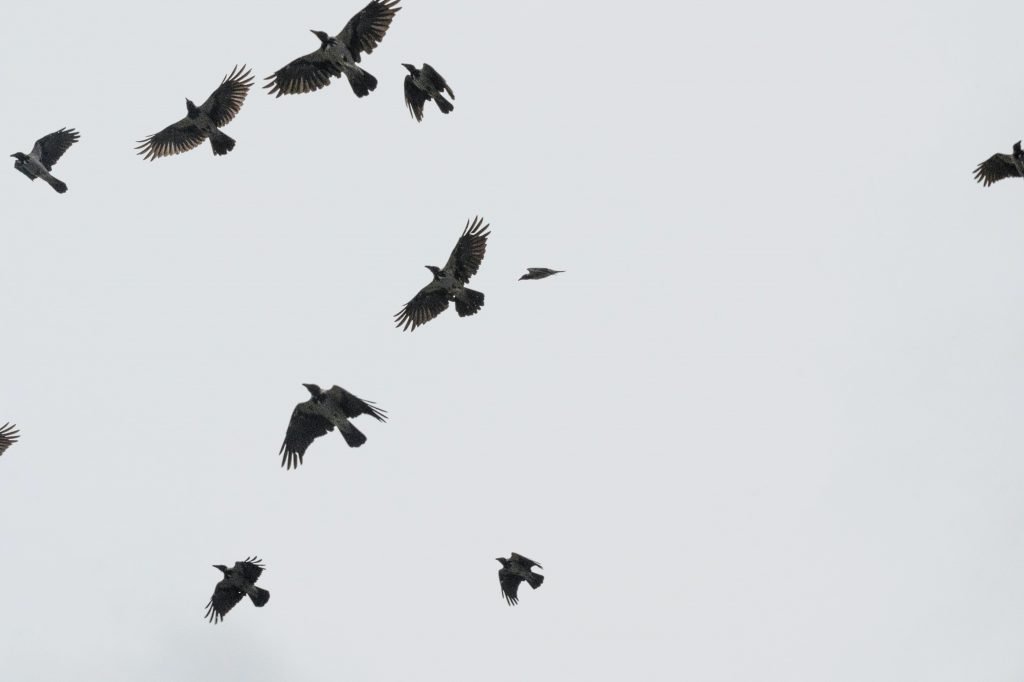