Birds of a Feather

Previous Next
Birds of a Feather

I don’t know many birds. It seems funny, but when I consider all the members of the animal kingdom I think are pretty awesome and I might enjoy having tea with, there are relatively few birds on that list. Ravens and crows, obvs. And blue footed boobys because boobs, obvs. And probably ducks, because they seem to have personalities ranging from dapper to dickish, which suggests the conversation would at least be interesting.
Also, I like that they walk, fly, swim, dive, have waterproof feathers and freezeproof feet, and apparently the bebehs talk to one another while still in their eggs. Also, the internet just told me they can see in 4D colour. I’m not sure what that means, but I bet the next iteration of phone technology will have it.
I’m kidding. About only knowing a few birds. I know lots of birds but I really do like talking about ducks for some reason. Also boobys. Because… 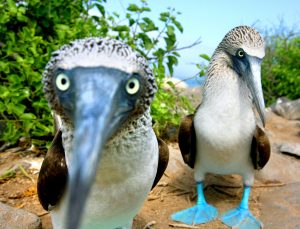 Anyhoo.
It’s really easy to consider that there are sane, compassionate weirdos everywhere (there are!) because that’s what we as humans do a lot of the time, gravitate toward those who vibrate on similar frequencies. It’s easy for me to forget or disregard the rampant and willful ignorance and bigotry which exists in the world because a) I tend to eschew the company of most humans, and b) so much of my social media feeds and friend circles are comprised of people who think much the same as me, that boobys are pretty awesome.
And perhaps it’s to my detriment that I don’t have a broader exposure to more perspectives. There are certainly other birds who are just as majestic and impressive. For anyone who has witnessed murmuration, a dance of flight that starlings participate in, it’s really incredible how there is an exquisite sense of timing which happens when beings are in conjunction with one another.

For anyone who hasn’t witnessed murmuration, here is a video of it.

Part of its beauty of it is that it comes of necessity. I don’t know a whole lot about it but apparently it is the result of a predator in their midst. A dance with death. Which we’re doing every day. I feel like when we align ourselves with those who help us to shine brighter, it creates the same sort of dance, a beatific defiance in the face of not only our own mortality but simple existence within a paradigm which isn’t totally suitable to uninhibited mental, emotional, spiritual growth and evolution.

As long as we’re throwing around proverbs involving birds, one of my favourites is ‘like water off a duck’, which I love because it’s got a certain Stoicism coupled with ‘the dude abides’ sensibility to it, however, I do think it’s important to have good boundaries when it comes to letting things slide which are insupportable.

That said, the best part about being a starling or a weirdo is that responding to threats with emotive interpretative dance is perfectly reasonable.