“Come all you rambling boys of pleasureAnd ladies of easy leisure..”

Easy leisure denotes the possibility of difficult leisure. I know that it’s difficult for some to embrace the notion that free time may be spent doing absolutely nothing, if one so desires. As though any moment we’re not working or sleeping should be dedicated to practicality, productivity, putting effort into relaxation.
There is a leisure centre not far from where I live. There is a swimming pool, tennis courts, a workout gym, classes in stretching and bouncing and sweating. None of which seems to operate at anything resembling a leisurely pace.
For years I’ve considered and called myself lazy because I needed some sort of validation for not wanting to do anything besides sit around and read books when I’m not at work or asleep. I’m really glad to see the conversations happening around the use of one’s time ultimately being no one’s business except the person existing.
It seems weird to me that if one is wearing a certain type of pants and paying for a membership to a club where they actively relax with a group of people who also wear pants and actively relax, it’s somehow more reasonable than corpse posing on the sofa after work before dinner? (which will be at 830pm because that was an especially vigorous corpse pose session and lasted about an hour longer than expected.

The nice thing about aging, for me anyway, is that I feel less obligation to dress and speak and act in ways which might indicate some sort of fealty to what anyone else thinks I should be doing. That includes myself, which is a lovely place to be when it works out. I am wholly unconcerned with this idea that I need to come home and be productive to the exclusion of naps that last too long (define too long) and curling up with a book which does nothing but entertain me. It kind of reminds me of when I was hanging out with someone and we had a garden, (he had a garden) and I wasn’t allowed to plant flowers unless they had some practical application, like food. Which is probably part of the reason we don’t hang out anymore and the next time I have a garden (which is hopefully soon) I am going to plant so many flowers which do nothing but look pretty and get bees drunk.

Because ideally, how I spend my time is in finding ways to feel connected to that which makes me happy, which gives me pleasure, which keeps me healthy and sane so that when I need to step up and kick ass, I’m well rested and ready to rock.

Until then, finding a nice hammock and rocking that, perhaps while napping with a lusciously tawdry romance novel seems about the best idea ever. 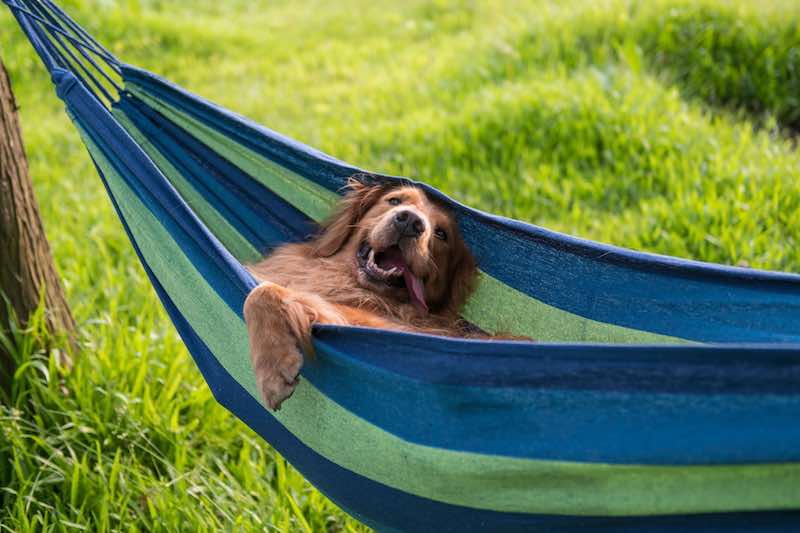 Golden Retriever resting in a hammock