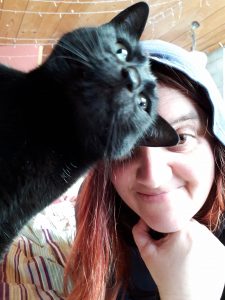 I wanted to write this as a story. I was so sure that was how it planned to show up. A fiction, woven with that familiar scent that tales ancient without being musty, tend to have. There is a universality to the fear that comes of doing it wrong, whether that is mixing up baking powder and soda while baking, or forgetting to cross your fingers when walking under a ladder in a cemetary on the 13th of Tuesday.

We’ll knock on wood, flip a coin, toss some salt, hold our breath, avoid circonanambulating (widdershins) around a church, and some of the time, have no idea why, when or how these habits originated. It’s just what’s done.
I have dozens of things I probably do which have no real rhyme or reason beyond it’s something I do, have nearly always done, and it just feels correct. Not right, that suggests a definition which most of these customs lack, there is an ethereal intangibility to them right up to the moment I might skip it. Then they determinedly, solidly make themselves known. And it’s one of those things where you can ask, is it working? Maybe. If I stop and something goes terribly awry, that still doesn’t answer the question.

I think the only time these rituals even deserve scrutiny on anything beyond a casual glance is if they inhibit the lives they are attempting to make better. But if it feels good to visit the shops on a wednesday, wear red on a saturday, pinch your ear twice when you sneeze, and let a black cat photobomb you as often as possible, then why not?

As an aside, I really miss Miles and hope that wherever he is, he forgives me for leaving, and I hope that he is a happy wild cat, still.